A Crash Course in Biblical Evangelism 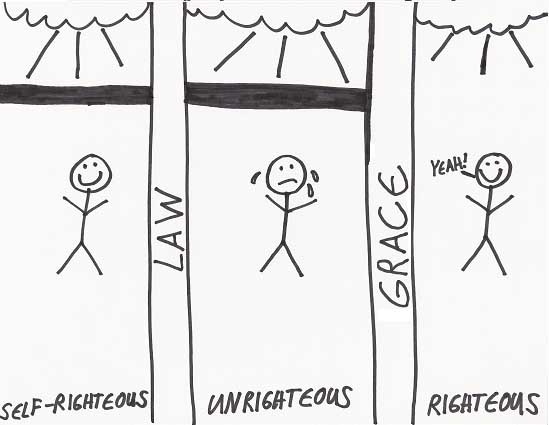 Self-Righteous
Righteousness is another way of saying, "right with God." So someone who is self-righteous has the attitude that he is right with God because of his self, or his worthy actions. This person believes he is in good standing with God because he thinks he's a good person or because he's done enough good things to earn a right standing before God. Notice that this person in this drawing is smiling, although he's really separated from God by his sin.

Unrighteous
By going through God's Law, this person can quickly be humbled by the knowledge of his sin. His conscience reminds him that deep down, he knows he's done evil. He is now aware of the separation between himself and God (seen above him), but this in itself doesn't solve the problem- all it gives him is an awareness that he is really unrighteous, or "not right with God."

Righteous
If the person then passes through grace and accepts God's gift of forgiveness by Jesus paying for his sins, he is in a new standing with God. The barrier of separation has left him, and he is truly righteous right with God.

The "Cheap Grace" of Modern Evangelism
Not everyone makes it through these steps to become born-again. Modern evangelism, ("God loves you and has a wonderful plan for your life Quick! Say this prayer and you'll know for sure you'll be heaven when you die!") seeks to eliminate the middle step by not mentioning God's Law. When we skip this, it often produces people we call "backsliders" or as the Bible calls them, "False Converts" who have skipped this and never really repented (Jesus said repentance is necessary for salvation- Luke 13:3, 5). They may have repeated a prayer and asked Jesus to come into their heart, but without repentance they are not truly Christians.

Some people get to the second step, admitting their guilt but not accepting forgiveness. A true Christian goes through all three. To become a Christian, one must repent of his sins and trust in the God of the Bible.

So I'm asked- why do you talk about the 10 Commandments? Why not just tell people about God's love?

Why? Because Jesus didn't do that. There is no model in Scripture of the disciples preaching "Jesus loves you!" They knew what Paul knew: "The Law is a schoolmaster, to bring us to Christ."

Creating Your Own God
There are some people we encounter who claim they really repented and trusted in Jesus, and yet are not Christian. I believe them- because the god they call Jesus is actually not the Jesus of the Bible -the one who can save them- but an idol. When you listen to the audios, I'll often press people to tell me about their Jesus. Is he really God? Did he actually rise from the dead? Is he also Buddha? Often, the Jesus that people are talking about is not the Jesus of the Bible. He is a being who doesn't exist outside of the mind that created him.
Scripture makes it clear: only the God of the Bible can save people from their sin. No other "Jesus" can pay the punishment for their sins. Reason and common sense confirm this: faith only works if you believe in what's true.

So there you go. That's your "crash course" in biblical evangelism. Now what about you? Have you seen yourself before God's Law? Did you accept His forgiveness? If you haven't, I encourage you to do so today. You may not have tomorrow.

By listening to the various audios on this site, you can understand where people are in their own state before God's self-righteous, unrighteous or righteous. One interesting thing to note is that often when people move from being self-righteous to unrighteous, you can hear their voices slow down. They speak more quietly and seriously. Once again, the Bible confirms this in Romans 3:19:

"Now we know that whatever the law says, it says to those who are under the law, so that every mouth may be silenced and the whole world held accountable to God."

When someone moves from the state of unrighteous to righteous by accepting the forgiveness of God's forgiveness, that person will often sound buoyant, grateful and relieved. "It's like you're on a swing!" a 6 year old boy, after becoming a Christian remarked. "It's like... you're playing soccer and you know you're gonna win!"